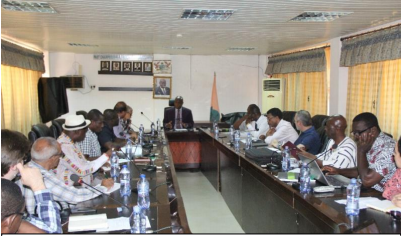 The West African Centre for Water, Irrigation and Sustainable Agriculture (WACWISA) on Wednesday, 27th November 2019, played host to a team of research scientist from the Mohammed VI Polytechnic University (UM6P), based in Morocco. The team was on a mission to explore possible research collaboration with WACWISA-UDS in the areas of soil fertility improvement and crop production.

Welcoming the team from UM6P, the Vice Chancellor of UDS, Prof. Gabriel Ayum Teye expressed his delight with the team for visit to UDS, which he said is often considered by some visitors as quite far up north of the country from the capital Accra. He indicated that the location and environment of UDS gives its uniqueness as a university that is for development in every arena of human existence. He said the University is multi-campus with campuses in Wa, Navrongo, Nyankpala and Tamale, where it is headquartered; and runs a variety of programmes in the different campuses. He observed that the mission of the scientists to explore possible collaboration with their counterparts in UDS in the area of soil fertility enhancement and crop production, was a welcome idea. This is in line with the mission of WACWISA, which is a Centre of Excellence that is aimed at promoting water, irrigation and sustainable agriculture development. The Vice Chancellor therefore encouraged the team to make the best use of the opportunity in the interactions with their UDS counterparts.

On their part, the UM6P team explained that they were Agricultural scientist from a very unique university, UM6P, which is seeking to build collaborations with the best brains and institutions across the world and use that capacity to transform Africa. They said Mohammed VI Polytechnic University was established by the King of Morocco to promote a special vision for a south, south cooperation with other countries in Africa in the areas of teaching, research and extension with the use of the finest state of the art technologies in training the best brains from Africa that can transform the continent. The University has a number of Centres including, the Centre of Excellence in Soil and Fertilizer Research in Africa (CESFRA), The Agriculture Innovation and Technology Transfer Centre (AITTC), etc. The team said, this vision of UM6P is also supported by OCP Foundation; a multi-national agribusiness and agriculture development organisation whose interest is to support research into developing improved fertilizer varieties for specific soil types in the different ecological areas of Africa. The team’s mission in Ghana, which had already taken them to the University of Ghana-Legon, The Kwame Nkrumah of University of Science and Technology, was to interact with their Ghanaian counterparts on broader subjects such as soil science, plant breeding etcetera, with the aim of developing joint research projects in areas of common interest and mutual benefit.

WACWISA UDS Participates in the 8th Regional Workshop of the ACE Impact Project in Banjul, The Gambia